Karate and the link to CSKA


What you need to know about Karate

What is Karate?
"True karate is that in daily life one's mind and body be trained and developed in a spirit of humility, and that in critical times, one be devoted utterly to the cause of justice." Gichin Funakoshi

The word karate is a combination of two Japanese characters: kara, meaning empty, and te, meaning hand; thus, karate means "empty hand." Adding the suffix "-do" (pronounced "doe"), meaning "way," i.e., karate-do, implies karate as a total way of life that goes well beyond the self-defense applications.  In traditional karate-do, we always keep in mind that the true opponent is oneself.

Different Karate Styles
The various karate styles practiced throughout the world, originated in Okinawa. The Okinawan culture and economy flourished until the end of the 16th century. Their independence was terminated when the Japanese military regime decreed the invasion of the island in 1609.

This lead to the prohibition of weapon carrying by the natives.  In turn, this event sparked the golden age of Okinawan martial arts, as many natives practiced Okinawan-te in secret (incorporating Chinese 'Chu' and 'Fa' as well as the native 'Tode').

Master Gichin Funakoshi also studied in secret, until he disclosed his art and philosophy of karate-do in 1901 to Okinawa and in 1922 to the Japanese mainland.  Division into styles was never his intention, but nevertheless, different styles were cultivated by the appearance of three big Okinawan karate schools, Naha-te, Shuri-te and Tomari-te (Japan). 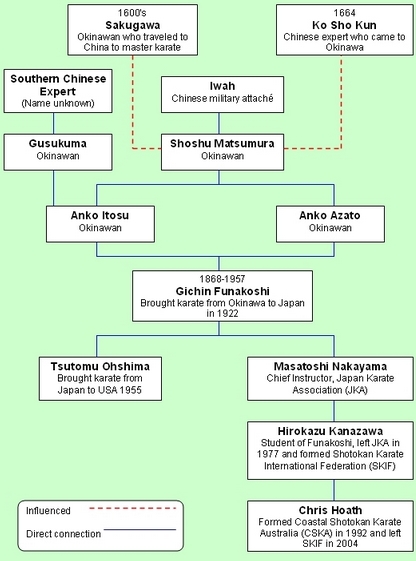 History of Ranks
The origin of the Shotokan Karate Ranking System is believed to have evolved with the influence of the Japanese.  Originally in Okinawa, karate students did not get promoted for learning a new kata, they did not receive coloured belts, they did not receive certificates proclaiming their agility, and they didn't even wear karate uniforms.

Funakoshi, the founder of Shotokan Karate, was never given a rank by his instructor. He was taught in his instructor's back yard in his everyday clothing.  He learned karate kata systematically one after the other without receiving colour belts for his efforts. Upon arriving in Japan, and associating with Kano Jigoro, the founder of modern Judo, Funakoshi adopted the Judo uniform and the colour belt system for use in karate. This was the first instance of karate uniforms in history. Upon taking up this new ranking system, Funakoshi at first seems to have rejected the idea of holding a rank for himself.

Many different steps have been taken to standardize the ranking system and what we have today is a reflection of the systems in place worldwide.

Class Etiquette
1. Remove shoes upon entering the dojo
2. Keep the dojo clean
3. Do not lean on dojo walls – only stand or kneel on the floor
4. Bow upon entering or leaving the dojo floor
5. Bow to Senior Students and Instructors
6. Always refer to your instructor as ‘Sensei’ – a sign of respect
7. Uniforms are to be kept clean and in good repair - Finger and toe nails should be kept short to prevent injury - hands and feet should be clean
8. Jewellery should not be worn during training - watches, rings, earrings, necklaces, etc. often get in the way and can cause injuries.
9. Always answer or acknowledge your instructor with ‘Oss’
10. Thank your instructors at the end of a training session – 'Onegaishimasu' (On-a-gush-emus-soo) (Please teach me - Please help me)

Niju Kun (20 Principles of Shotokan)
Words of Gichin Funakoshi
1. Karate is not only dojo training
2. Don't forget that Karate begins with a bow and ends with a bow
3. In Karate, never attack first
4. One who practices Karate must follow the way of justice
5. First you must know yourself, then you can know others
6. Spiritual development is paramount; technical skills are merely means to the end
7. You must release your mind
8. Misfortune comes out of laziness
9. Karate is a lifelong training
10. Put Karate into everything you do
11. Karate is like hot water.  If you do not give it heat constantly it will again become cold
12. Do not think you have to win, think that you do not have to lose
13. Victory depends on your ability to tell vulnerable points from invulnerable ones
14. Move according to your opponent
15. Consider your opponent's hands and legs as you would sharp swords
16. When you leave home, think that millions of opponents are waiting for you
17. Ready position for beginners and natural position for advanced students
18. Kata is one thing, engaging in a real fight is another
19. Do not forget (1) strength and weakness of power, (2) expansion and contraction of the body, (3) slowness and speed of techniques
20. Devise (plan) at all times

What is Kata/Kumite/Kihon
Kata
Kata are patterns of techniques that we perform involving imaginary defense against numerous opponents.  Kata is a method of practicing applications for particular self defense scenarios.

Kumite
Kumite means sparring, and the focus of kumite is to practice using the techniques we learn from kata. Kumite may take the form of fixed step sparring (5 steps, 3 step, 1 step) or free fighting.

Kihon
Kihon means the basics, perfecting the punch, block, kick, and the stance. Working on the body rotation and propulsion dynamics and using the major muscle groups.